Lowestoft Town Council are pleased to announce that the new Fitness Equipment at Normanston Park and Fen Park are now open.
The equipment at Normanston Park features traditional outdoor fitness equipment for adults whilst the Fen Park equipment is an all-age assault course.
When using the equipment, please make sure you warm up beforehand, wear sensible clothing and shoes and read the instructions displayed on each piece of equipment.
A formal opening of these sites will take place at a later date. 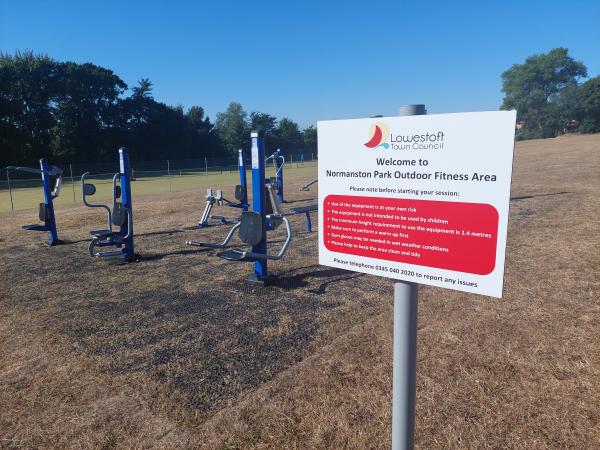 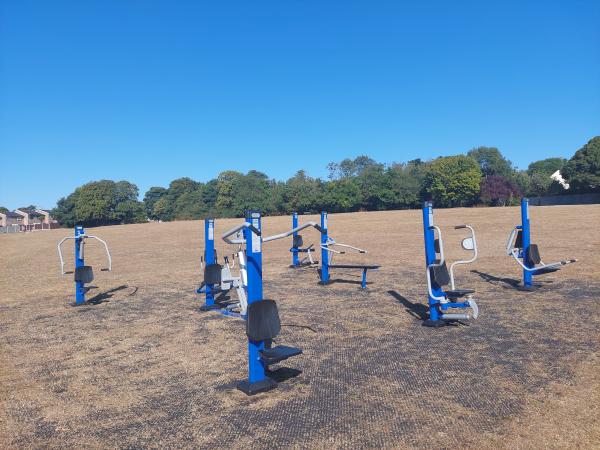 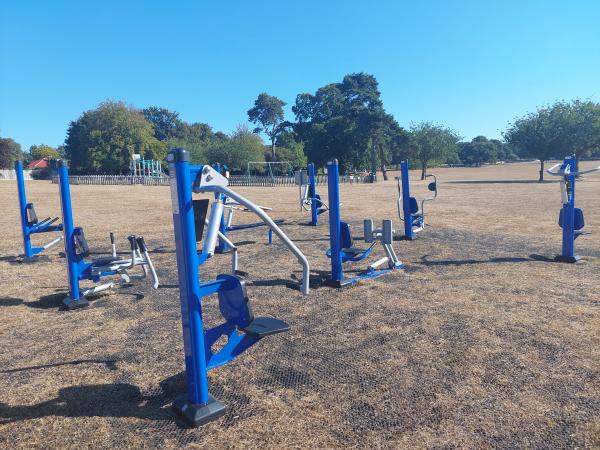 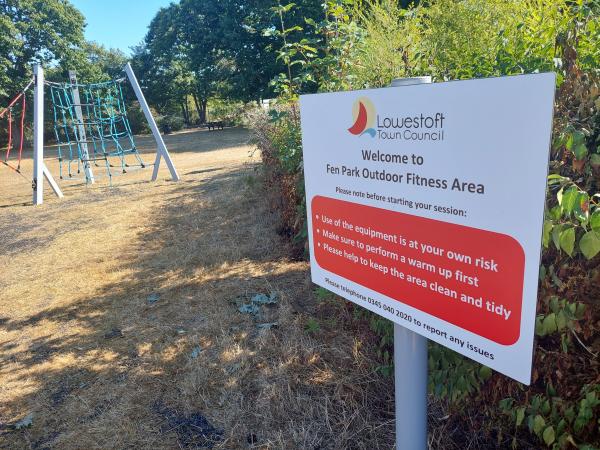 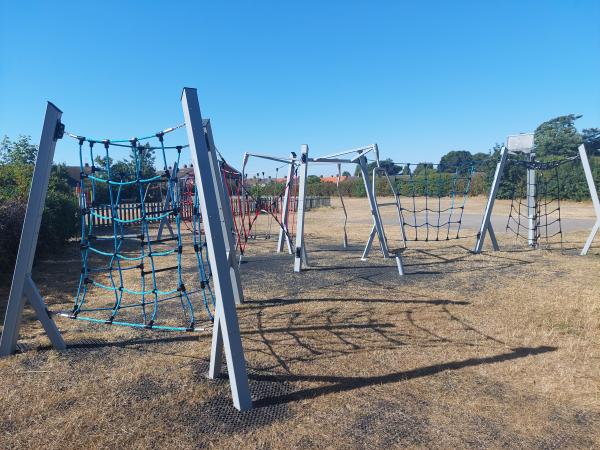 £24.9m regeneration programme given go ahead

In 2019, Lowestoft was chosen as one of 100 UK towns to benefit from the Government's £3.6 billion Towns Fund. Each town was invited by the Ministry for Housing, Communities and Local Government (now the Department for Levelling Up, Housing and Communities) to develop a proposal for a Towns Deal, with up to £25 million available to bid for.

In 2020, a Town Investment Plan which sets out Lowestoft’s ambitions, opportunities and challenges over the next ten years was submitted to the Government as the basis of a £24.9m application to the Towns Fund, focusing on five transformational regeneration projects.

The full funding was provisionally secured in March 2021, in which a Town Deal was agreed in principle with Government, subject to the completion of detailed businesses cases for each of the five projects. These were completed in March 2022 and all five projects have now received final approval from Government.

Cllr Craig Rivett, East Suffolk’s Deputy Leader and cabinet member for Economic Development said: “Securing £24.9m through the Government’s Town Fund was great news and since then, there has been a huge amount of work ‘behind the scenes’ to prepare a detailed business case for each of the five major regeneration projects. Receiving Government approval for all of the business cases is incredible news and means we can now move forward at pace with our ambitious plans to enhance the town, driving economic growth and attracting future investment.”

The five projects are:

All five projects have now advanced to the design phase and in the coming months, residents, businesses and visitors will be able to view proposed designs and learn more about each project.

The Lowestoft Town Investment Plan was developed in partnership with the Lowestoft Place Board, which comprises representatives from public, private and voluntary organisations and is overseen by East Suffolk Council.

Stephen Javes, Chairman of the Lowestoft Place Board said: “Over the past two years, the Lowestoft Place Board has been working with officers at East Suffolk Council to secure the Towns Deal. Firstly, through the development of the Town Investment Plan and then by endorsing the business case for each project. We will continue to monitor and evaluate the delivery process and are excited to see the opportunities this brings to the town as well as looking to add value that improves the town beyond the Deal.”

Waveney PM Peter Aldous said: “It is great news that these five major regeneration projects have secured final Government approval and construction work can now get under way. It’s necessary to thank all those who have worked so hard in preparing the business cases for each project as they have left no stone unturned to get to this stage.

“Lowestoft faces both tremendous challenges and opportunities in the coming years, and projects like these will help us to address the former and to take advantage of the latter. I shall continue working with local councils, the Government and businesses to ensure that the necessary policies and support are in place, so that the town realises its full potential for the benefit of the whole community.”

Lowestoft Mayor and Town Councillor Alan Green said: “Lowestoft Town Council is delighted to be working with East Suffolk Council on this funding designed to benefit Lowestoft people, business and visitors. The inclusion of our assets, including the Marina Theatre and Town Hall (the latter with generous contributions also from the National Lottery Heritage Fund, Historic England and Architectural Heritage Fund), should make a significant contribution to transformation work underway.”

“The LEEF project, which recently won ‘Best Project’ in the regional Royal Town Planning Institute (RTPI) Awards for Planning Excellence 2022, has the potential to attract many supply chain companies to Lowestoft and create an offshore renewable energy cluster, bringing new jobs and prosperity to the area.”

All projects are due to be completed by March 2026.

Read more on £24.9m regeneration programme given go ahead

With over 100 FREE events taking place in Lowestoft there’s lots of opportunities to find out more about the town’s rich and varied history. The brochure for this year’s content is now available or you can find out more on the website (Homepage | Heritage Open Days)

Look out for a number of events which are running as part of the Lowestoft Town Hall project.

Book tickets to hear Local Historian David Butcher talk about the history of the town hall site from 1300 to the present day. Wednesday 14th September 10-11am in the Town Hall. 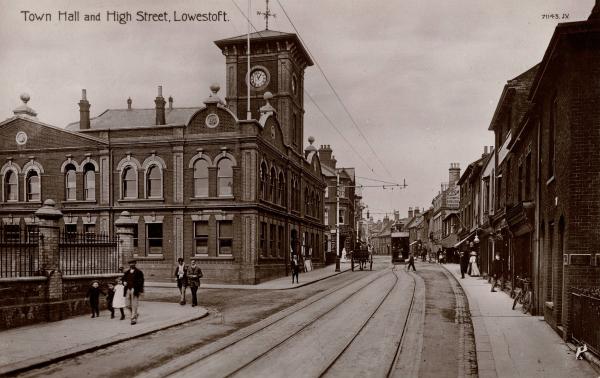 We’re also bringing history into the 21st century; Lowestoft museum’s priceless porcelain pugs are getting an upgrade! Tim Cross, local ceramic artist, has 3D scanned the pugs and they’ll be 3D printed in Lowestoft Ceramic Studio shop window throughout the HOD's festival. This pair of extremely rare Lowestoft porcelain pugs were recently acquired by Lowestoft Museum and are available to see in the Lowestoft Porcelain gallery in the Museum. There will also be a video of the 3D scanning process which can be seen at the Museum and also Lowestoft Heritage Workshop Centre. 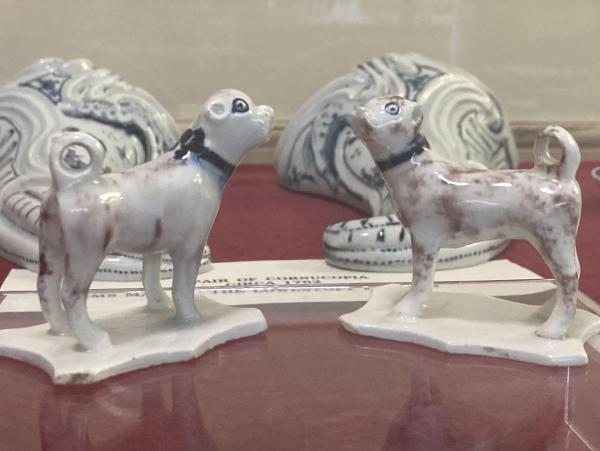 Book your ticket to catch Tim talking about Lowestoft Porcelain, how it has influenced his work and the process of 3D scanning. Saturday 10th September 3.30-4.30pm in the Town Hall.

You’ll be able to explore a new and improved Virtual Town Hall, created by Hugh Davies. See places in the Town Hall that you can’t normally visit, ring the Town Hall bell, find out more about the history of the building. Over the coming months, it’ll be the go-to place to find out updates about the project, more rooms will be added and also be acting as a virtual heritage hub with changing exhibitions which tell the story of Lowestoft and link to the many museums and heritage organisations in the Town. 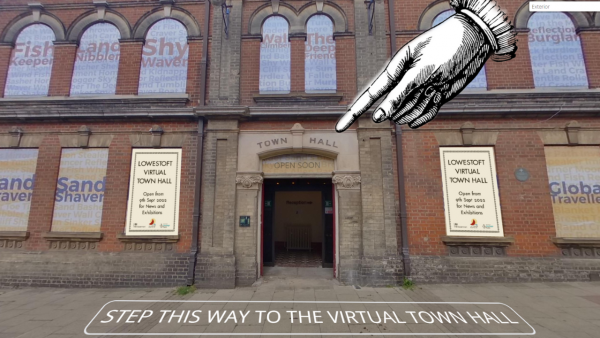 A screenshot from Virtually Here. Created by Hugh Davies and licensed under Creative Commons 4.0

As part of our ‘Your Lowestoft Stories’ project, working with Poetry People, we want to find out about your memories and experiences of living and working in Lowestoft which will contribute to a new video poem.  Look out for our 'Stories/Memories Boat', (an adapted tricycle designed to look like elements of a historic fishing vessel) which our Heritage Engagement Coordinator, Liz Ballard will take on a voyage around Lowestoft to capture people’s memories and stories, there’ll also be children’s activities that link to the history of the town and share news about the project.  Events | Heritage Open Days 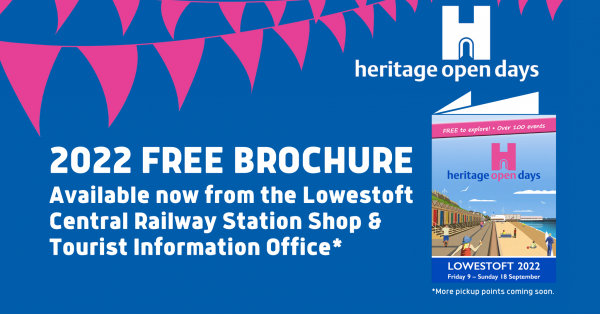 The Met Office have put out further Amber Weather Warnings across the UK this week from Thursday 11th August.

With the continued hot weather predicted, it is important that we keep cool and hydrated.

The NHS recommend that we all: 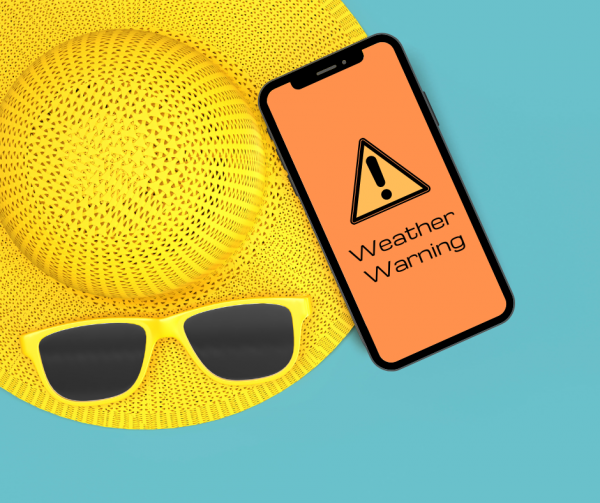 Ways to Save Water

Although there are currently no plans to enforce a hosepipe ban in the Lowestoft/Suffolk area, it is still important that we conserve water.  This not only protects our water supplies and our environment but can also save you money!

Essex & Suffolk Water have put together some handy guides for how you could save water - from turning off your taps (saving 6litres per minute) to taking showers instead of baths.

They also have a FREE water saving kit that you can order to help with your water economy. 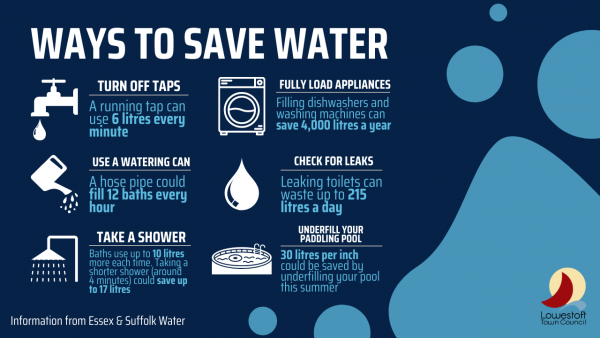 Read more on Ways to Save Water